What does it mean to take yoga “off the mat”? For me, it means taking the lessons we learn on our mats — cultivating balance, equanimity, nonviolence and compassion, for instance — and bringing them into our daily lives, allowing them to guide the way we take action in the world.

My own journey to nonviolence was through the door of yoga. At the time, I was a stressed-out, anxiety-ridden college student with low self-esteem and a poor body image. I initially enrolled in a hatha yoga class at the college gym in the hope of burning calories, and even though the first class was gentle — or perhaps exactly because it was gentle — I felt so great afterwards. I didn’t know why I liked it, I just knew that I did and wanted more. As the semester went on, I fell in love with the practice, even chanting. The teacher, Susan, taught it in such a way that I hadn’t realized we were chanting (at the time I was rather “allergic” to anything that seemed remotely religious). She was steeped in the practice, and later I learned that she had studied with a swami who had come to North America from India in the 60s. I was lucky to have started yoga with such a skillful teacher.

Yoga is not just postures and breathing, but rather a science and art that systematically helps humans achieve their highest potential.

Throughout that semester, I was experiencing my own inner transformation, finding a deeper sense of calm and realizing that some of the negative thought patterns I had been holding onto were no longer serving me. It was after reading a book recommended by my cousin that I truly realized how transformative the practice of yoga could be, that it was really a roadmap for living and self-discovery. The book was Yoga and the Quest for the True Self by Stephen Cope, who shares his journey from a career in psycho-therapy to being a scholar-in-residence at Kripalu Center for Yoga & Health in Stockbridge, Massachusetts. And it helped me realize that yoga was not just postures and breathing, but rather a science and art that systematically helps humans achieve their highest potential.

From that point on, I devoured all the books, websites and classes about yoga I could find, eventually stumbling upon ahimsa (nonviolence), the bedrock of yoga’s ethical foundation. Though my grasp of ahimsa at the time was limited, I knew that I wanted my life to be guided by that principle — to not harm others. Later, I would come to understand nonviolence as love-in-action, as much more than not harming others.

Considering that ahimsa is the first principle, the guiding principle of all yoga practices, it’s interesting to note that it took some stumbling and digging before I came across any information about it. It was not frequently mentioned in classes, either. How is it that the foundation of the practice could be so elusive, so ignored?

I wanted my life to be guided by ahimsa. I would come to understand nonviolence as love-in-action, as much more than not harming others.

After several years of daily hatha yoga practice, I decided to take a yoga teacher training program so that I could share the healing and transformative power of yoga with others. Inspired by Stephen Cope’s personal story, I signed up for the 200-hour yoga teacher training at Kripalu, which offers generous scholarships, making their trainings more accessible to people of all income levels and backgrounds. I did not have much in the way of disposable income, having just returned from two years of service in Niger for the Peace Corps, but I did have a fire for yoga and a deep desire to teach in the spirit of service. I was offered a scholarship and I spent a beautiful, intensive month at Kripalu, where I earned my 200-hour certification.

During the Kripalu training we did things that, at the time, seemed unrelated to yoga — active listening exercises, compassionate communication and a lot of self-reflection. The entire program was highly experiential, creative and centered around group learning processes. Later, I found that these exercises had everything to do with yoga: they were tools to take the practice of presence off the mat and into our relationships. I began to see that peace could be learned and wondered why we weren’t learning it in our broader society.

After the training, I began traveling, teaching yoga along the way. Eventually I landed in Japan, where I taught English for a year. During this time I was experiencing the connection between inner peace and outer peace, and it didn’t feel like enough to just focus on inner peace. My own sense of inner peace made me more sensitive to the suffering in the world, and there arose inside of me a need to address it. At the same time, I was seeing activists engaging in the world with a lot of anger and burnout and little inner peace, which didn’t seem effective. I discovered that I wanted to teach more than yoga and English; I wanted to teach peace. This yearning led me to study peace education at the University for Peace, a United Nations-mandated university established in Costa Rica in 1980.

I do my best to live in a yogic way. I am by no means perfect — that’s why we call yoga a practice!

Now my yoga teaching and peace education work go hand-in-hand, each one supporting the other. I bring my yoga and meditation practice into the college classroom — not through yoga poses, but through my own presence, my ability to handle challenges as they come up and in the flexibility and flow with which I teach my classes. Yoga, the Sanskrit word for union, can be expressed in all of our relationships and actions in the world.

I do my best to live in a yogic way. I am by no means perfect — that’s why we call yoga a practice! I recently wrote a series of articles for Yoga Living Magazine on the yogic code of ethics, which gave me ample opportunity to reflect on how I practice them in the world. I’m also supported by my practice of engaged Buddhism (I have formally received the five mindfulness trainings, which are like lamps that light my path).

There is so much work to be done in the world to end violence, establish equality and justice, and heal and preserve our planet. With yoga growing in popularity every year, there is an amazing potential for it to help foster the building of a world that benefits us all. 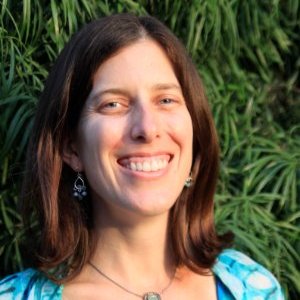 Greetings. I'm a peace educator and mindfulness practitioner who helps individuals and organizations integrate peace education into their work.